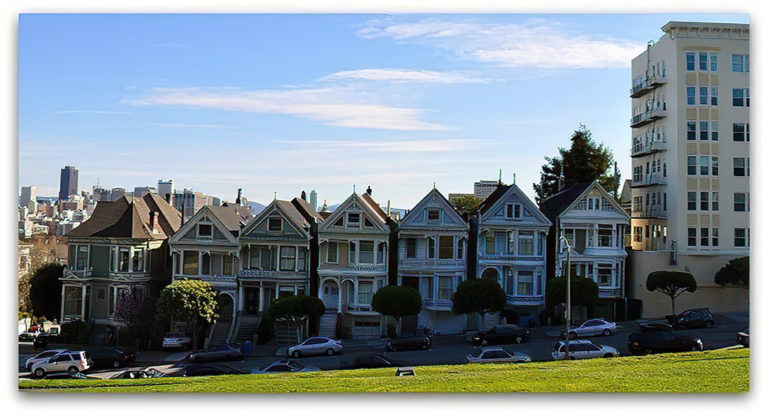 Do You Really Know the Pros (and Cons) of Living in Alamo Square?

Alamo Square in San Francisco, California is a both a great place to live and visit. “Why?” you ask. Well, here are just a few of the compelling reasons . . .

Certainly, there are a number of undeniable pros of living in Alamo Square, but (as with anything) there are also a few cons. So let’s take a closer look.

Alamo Square is a residential neighborhood in downtown San Francisco with a population of just over 3,000 (though there are higher estimates). The boundaries that delimit this historic neighborhood are a little hazy, but generally recognized as Golden Gate Ave. on the north, Fell Street to the south, Webster Street on the east, and Divisadero Street, west.

Like many other urban areas and neighborhoods that have experienced gentrification over the years, Alamo Square consists chiefly of young professionals and homeowners in the upper middle class. But, as a testament to its diversity, Alamo Square is also home to a varied older population.

Many businesses in Alamo Square reflect the tech start-up personality of San Francisco in general. And Divisadero Street, usually recognized as the western-most boundary, is home to a number of small businesses that include a growing number of trendy, popular restaurants and bars catering to young tech professionals.

Although Alamo Square has undergone gentrification and urban renewal, the Victorian architecture has, for the most part, remained untouched. Next to San Francisco’s Pacific Heights, it contains the most 10,000+ square-foot homes.

The most well known of these homes is a row of Victorians along Steiner Street facing Alamo Square Park. This area has been used as the setting for several films and TV shows, including 1978’s The Invasion of the Body Snatchers and 2012’s The Five-Year Engagement.

And there’s the Alamo Square Historic District, boasting homes and structures by renowned architects from the late nineteenth to early twentieth centuries. Noteworthy among these are Postcard Row and the Westerfield house, all capturing the historical San Francisco flavor while adhering to the original designs.

Alamo Square Park is a favored attraction of both residents (particularly dog owner) and tourists. Including a playground and tennis court, it offers views (on a clear day) of the Transamerica Pyramid building and Golden Gate Bridge.

As we mentioned, Alamo Square has a rich and intriguing history behind it. So we turn to Alamo Square Park . . . “Alamo Hill, as the plot of land was originally known, was a stopping point along the Divisadero trail from Mission Dolores to the Presidio. ‘Divisadero’ loosely translates to ‘with a view’ in Spanish . . . The name ‘Alamo’ most likely comes from the fact that there were poplar trees on the land as ‘alamo’ is the Spanish word for the tree.”

“The land started along the path to becoming a park in 1855, when mayor James Van Ness and other city officials began drafting a set of zoning regulations in what would become called the Van Ness Ordinances. The new legislation divided up the land west of Larkin using the grid system seen today – and beginning a long-running series of court cases with existing landowners and squatters to decide who would own what.”

In the course of this early zoning, the “city officially reserved some [land] for public parks, schools, streets and fire lots, . . . including what it defined as ‘Alamo, bounded by Hayes, Steiner, Fulton, and Scott Streets’ in 1857.”

But things weren’t really all this tidy and clear cut and didn’t have a linear progression.

For during this time, “most of the city was to the east in these years and the newly-designated park stayed little more than a rocky knoll for years. It became more accessible in the early 1860s, when well-connected city official Thomas Hayes obtained some of the newly-zoned city land down the hill made available with his friend and neighbor, the mayor Van Ness.”

And there were the outlaws to contend with. “[A] pair of infamous quasi-outlaw political figures in early city history, . . . built a little cottage in the middle of the block bounded by Divisadero, Fulton, Scott and McAllister. The one-story house served as the headquarters from which they hired “desperadoes” in order to defend the “various properties [they] unlawfully preempted from being taken over or built upon by their legitimate owners.”

Finally, near the end of the nineteenth century, the “park was “graded and tamed” in 1892 at the cost of $25,333 (or around $650,000 in today’s dollar). Paths and stairs were laid, and in 1896 the masonry wall was constructed by the California Concrete Company. Many Victorians were built by wealthy business men, doctors and lawyers who commissioned their homes from prominent architects of the time, the most famous of which are Matthew Kavanagh’s ‘Painted Ladies’.”

Today, after “150 years of turbulent city history,” Alamo Square Park is “an iconic destination for tourists and locals alike looking for a peaceful place to admire the views.”

When it comes to crime, Alamo Square rates an 87 on the crime index, which means that is safer than 87% of cities across the US. Pretty impressive, really.

As we pointed out early on, there are a few cons to Alamo Square:

Read a handful of descriptions of Alamo Square, and you’ll encounter these descriptors over and over: beautiful, iconic, and centrally located. Originally a distant suburb of San Francisco, consisting largely of bare sand dunes, Alamo Square is today a coveted location and top tourist draw.

Those wealthy businessmen knew what they were doing in the 1850s when they began developing it as a place to live away from the bustle of the city. And development continued on its nearly inexorable course . . .

Alamo Square “boomed from the 1870s to the 1890s. Residents built a variety of Victorian houses, from the well-known Queen Anne style to the more modest Stick style. In the 1960s, owners began to revitalize the houses in this district. They began to rehab their houses and paint them with lively colors. Locals and tourists alike loved them and began to visit them frequently.”

And here’s a neat bonus. The ground is more stable than in surrounding areas:  very few of the beautiful Victorian homes were destroyed in the 1906 earthquake.

Now Alamo Square is, of course, not for everyone. But the people who find it a good fit and like it wind up absolutely loving it.

Here’s how one resident of Alamo Square: “Pretty flippin’ awesome. I’ve lived by Alamo Square since the summer of 2011 and have really enjoyed it so far.”

Glen Park Neighborhood Spotlight: A Look at One of San Francisco’s Most Coveted Neighborhoods