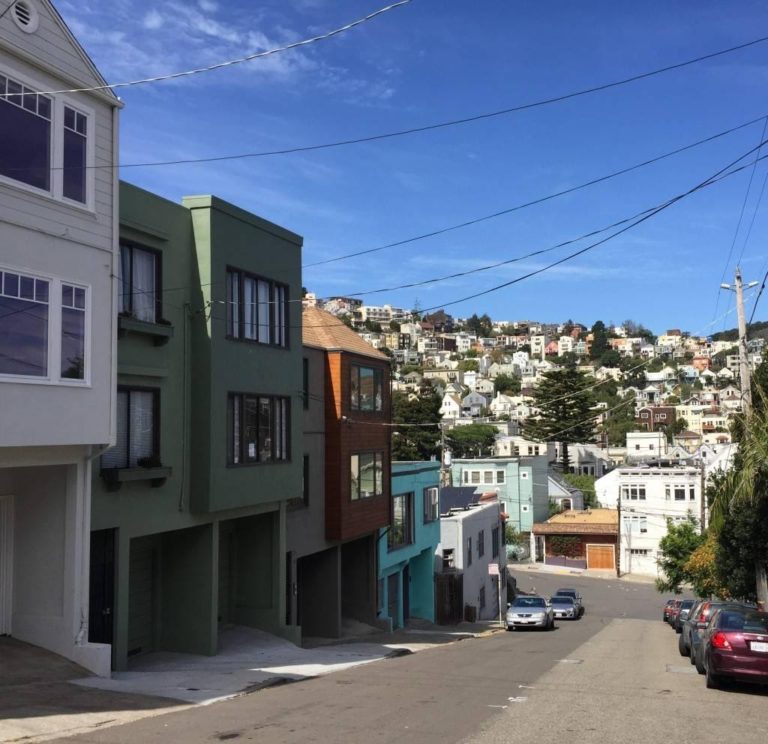 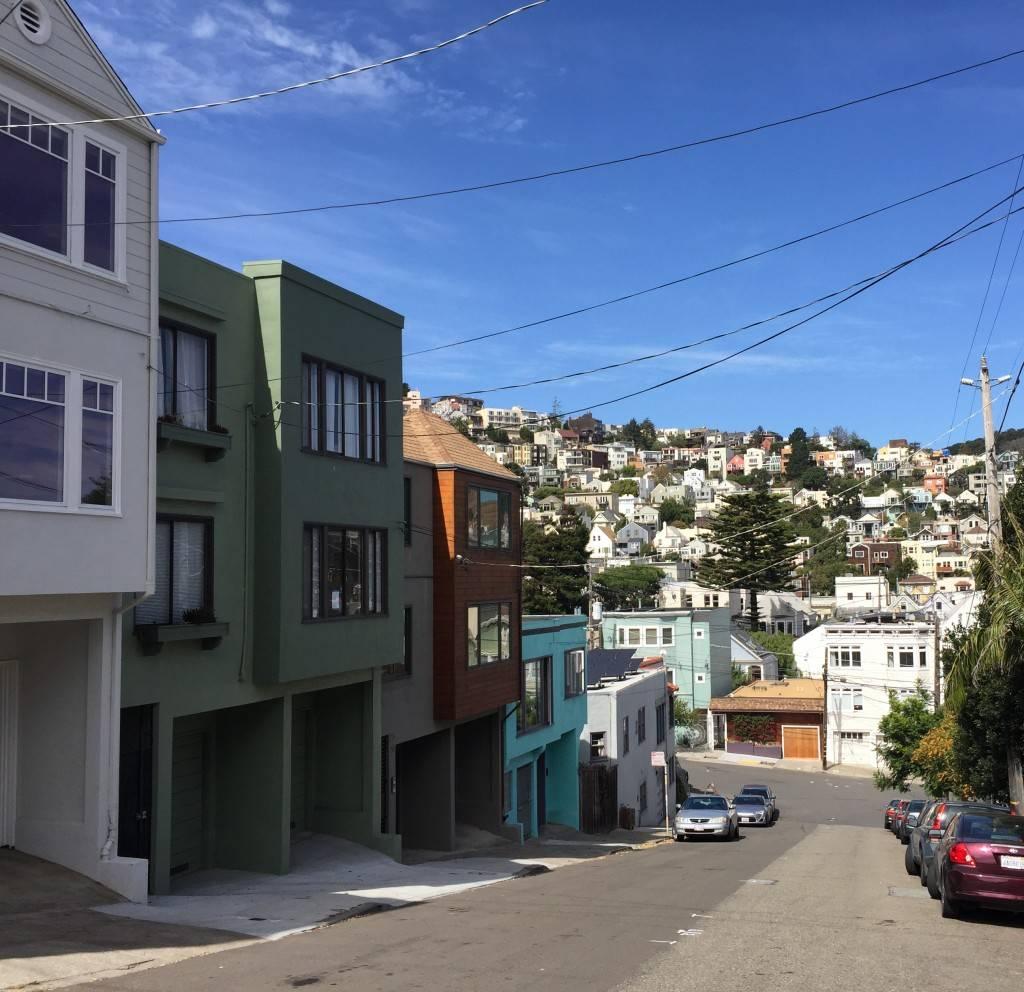 Eureka Valley/Dolores Heights is often said to be the quintessential San Francisco neighborhood – a place where you can find the genuine San Francisco experience. It is that, but it’s also much more today.

For this inclusive neighborhood, made up of several micro-neighborhoods, is home to both the LGBT community and many families. It does, after all, include the Castro District.

Such a changing neighborhood that captures the San Francisco vibe is certainly worth a closer look. 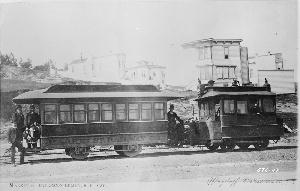 This area started out as the 4,000-acre Rancho San Miguel, granted to Jose de Jesus Noe in 1845. John M. Horner purchased the ranch in 1854 and began development, laying out what he called Horner’s Addition with Valencia Street on the east, Castro Street on the west, 18th Street to the north, and 30th Street on the South. Part of the Mission Dolores subdivision, Eureka Valley’s development didn’t happen till the late nineteenth and early twentieth centuries.

It was the opening in 1886 of the Market & Castro Street Cable Car line that really kicked development into high gear. Small wood-frame cottages and two-story flats sprouted up in abundance even though the only industry in the area was a mattress factory.

In the early days of Eureka Valley/Dolores Heights, residents were mostly lower middle class and working-class tradesmen, along with some civil servants and builders. The population was made up of old-stock Americans and a good number of British, Scandinavian, and German immigrants.

After the 1906 earthquake, refugees flooded the area, bought lots, and built cottages. Then the completion of the Municipal Railway J Church streetcar line in 1917 and the Twin Peaks Tunnel in 1918 further added to the development momentum. And it didn’t hurt that in 1905 The Eureka Valley Improvement association successfully lobbied San Francisco’s Board of Supervisors for several improvements, including better lighting, improved streetcar service, and construction of public schools.

Then, of course, in the 1970s the commercial hub at Castro and 18th Streets underwent a transformation. It developed into a gay community known as The Castro.

So survival, activism, and striving for a better life lie deep in the bones of Eureka Valley/Dolores Heights. 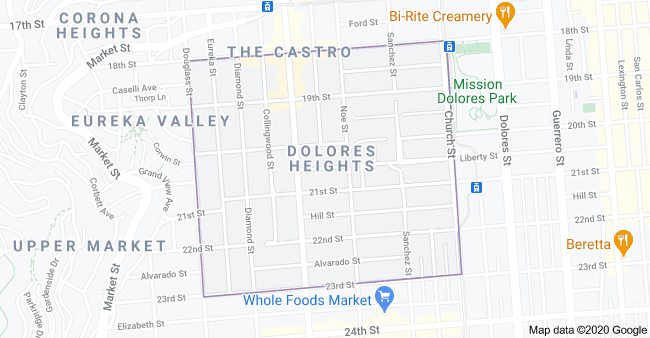 Today, Eureka Valley/Dolores Heights comprises several micro-neighborhoods, including, for example, Duboce Triangle and The Castro. In addition, for each micro-neighborhood, there is typically a neighborhood association to define and uphold the distinct personality of each.

Taken as a whole, this San Francisco neighborhood is known as a quiet residential neighborhood – even though it contains one of the most-visited micro-neighborhoods, The Castro. That’s one of the reasons why Eureka Valley/Dolores Heights is also popular with families.

But there’s more than The Castro and families quietly going about their lives . . .

Liberty Hill on the eastern end of Eureka Valley/Dolores Heights offers great views of unique homes. The architectural styles include many Victorians that survived the quake. Much visited landmarks include Harvey Milk’s storefront and the historic Castro Theater, and there are the many restaurants, bars, and clubs all serving to provide a vibrant nightlife.

Yes, Eureka Valley/Dolores Heights has quiet streets and charming, well kept homes, but it also offers celebration and reveling. You can see residents taking children for walks in the parks, and you can also join in the fun and energy of, say, the Castro Street Fair or Pride Week. 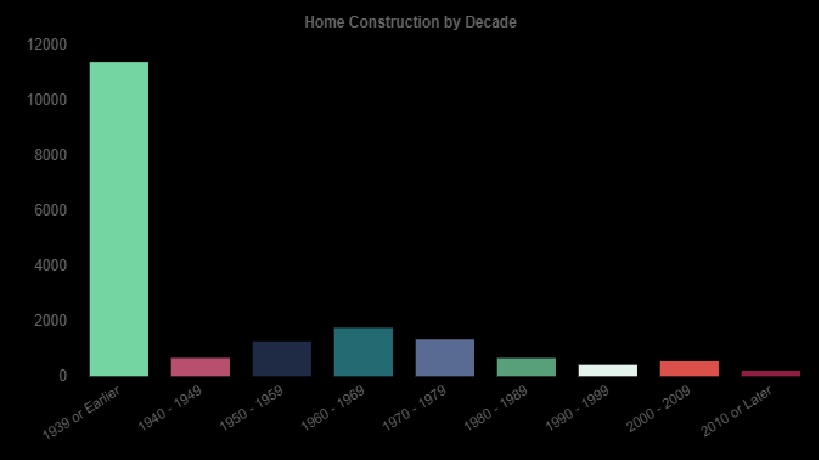 And the overall niche grade for Dolores Heights alone is A+.

So what are some general conclusions we can draw about Eureka Valley/Dolores Heights?

It’s a great place to live, whether considering San Francisco alone or California as a whole. This neighborhood offers a dense urban feel with plenty to choose from in restaurants, bars, coffee shops, and parks. It especially suits liberal-leaning young professionals. And, finally, the Eureka Valley/Dolores Heights public schools are highly rated.

Now, let’s leave aside all those mundane, pedestrian facts and figures and look at more of what sets Eureka Valley/Dolores Heights apart. 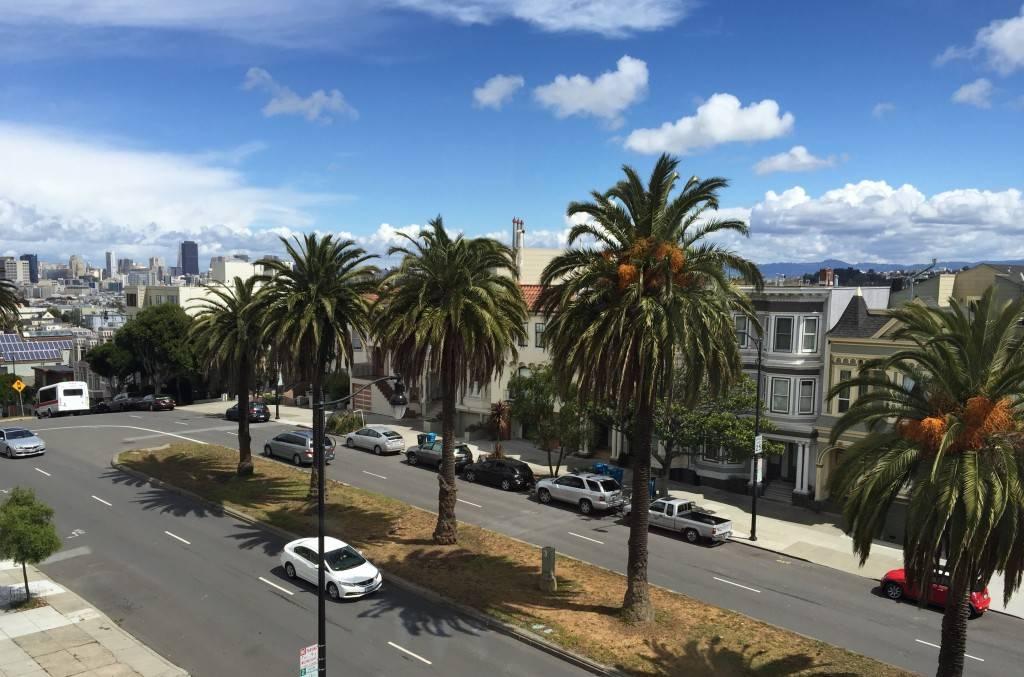 First, the weather in Eureka Valley/Dolores Heights is, simply put, great – it is “home to some of the warmest and sunniest weather in the city.” In addition, it “offers stunning views with which to appreciate the urban landscape.” That’s probably why the many films set in San Francisco have made a point to include these views and landmarks, particularly the “Canary Island date palms that line Dolores Street from beginning to end.”

Although slow to catch up with other San Francisco neighborhoods in this regard, dining opportunities and culinary offerings now abound. Neighborhood favorites include “Anchor Oyster Bar, Starbelly, Beso, Catch, Canela, and Hecho. For casual and/or late night dining options, check out other neighborhood time-honored favorites such as La Med, the Sausage Factory, Café Flore, Orphan Andy’s, Harvey’s, Hi-Tops, and Ike’s Place.”

But where Eureka Valley/Dolores Heights really shines is in entertainment and recreation options. Just a few prominent examples are:

This landmark theater designed by Timothy L. Pflueger and built by the Nasser Brothers in 1922 is one of only a handful of theaters from that era still in operation today. The Castro Theater hosts world-class film festivals such as “the San Francisco International Film Festival, the Silent Film Festival, the Film Noir Festival, and Frameline’s LGBTQ Film Festival.” You can also find the peculiarly San Francisco phenomenon of interactive screenings at the theater.

A favorite park in this area, Corona Heights Park is known for spectacular views. “At its peak, you will get views that stretch from downtown San Francisco to the Marin Headlands to Oakland and Alameda. It is truly impressive.”

This is a small kids’ museum, and it’s free. Exhibits focus on natural history, science, and arts. The Randall Museum has “loads of exhibits, including live animals (all rescues), and lots of hands on learning experiences.”

Conjuring images of ancient history and Greek gods, Mt. Olympus sits at the physical center of San Francisco. It may not be what it was in its heyday, but Mt. Olympus stills offers some great views, especially of some of the finest homes in the city. 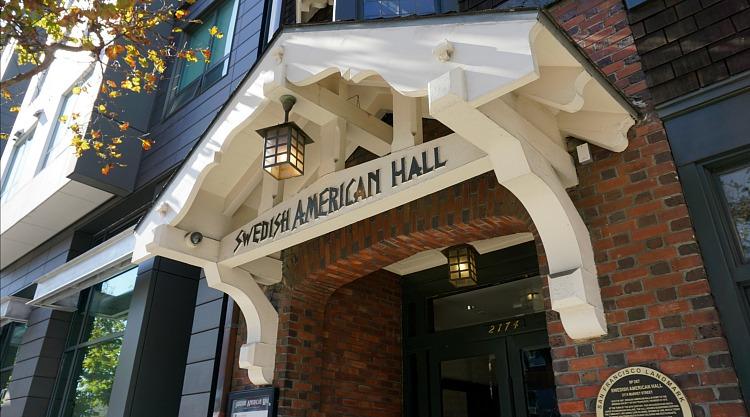 Actually two music venues, the Swedish American Music Hall & Cafe du Nord is “home to live music several nights a week. If you like feeling as if you’ve stepped back in time, then you need to make a stop here. This building is known for the beauty of its entrance way, the bar, and all the other decor you’ll see here.” Major stars who have performed here include Neil Young, the Kinks, and Train.

The Rainbow Honor Walk is really just a sidewalk, but one unlike you’ll see anywhere else. “This walk, [along with] the plaques that you’ll find on it, is dedicated to the heroes of the LGBTQ movement who have helped change the world’s view of humanity and how everyone should be treated with respect.” The bronze plaques, placed along several blocks, honor and memorialize people who have been instrumental in the struggle, for example, James Baldwin, Frida Kahlo, and Alan Turing.

So for anyone considering Eureka Valley/Dolores Heights, here’s what to keep in mind . . .

“The community vibe is . . . a diverse mix comprised of the longstanding LGBT community, the growing tech community, young professionals, families, and all of the intersectional communities that have emerged as a result of their commingling. The community vibe in the Castro is mostly LGBT-oriented, and like most other neighborhoods in San Francisco, its identity is becoming more fluid due to the city’s ever-changing demographics.”

“Eureka Valley/Dolores Heights is nestled between Mission Dolores, Noe Valley, and Twin Peaks in San Francisco. At the center of the district is one of the city’s most desirable neighborhoods: the Castro, which boasts a rich history that gives San Francisco its unique character and place in the world. Given this distinctive positioning, the valley offers a versatile lifestyle that is both urban and neighborhood-oriented. The eastern edge of the valley borders one of the city’s most prized parks, Mission Dolores, while the western edge sits on the border of Twin Peaks, a city landmark that offers spectacular views.”

A distinct past emphasizing basic rights, a changing demographic moving toward more professionals and families, the San Francisco essence, parks and spectacular views – there’s a lot to like about Eureka Valley/Dolores Heights.